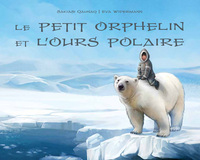 In the world of Inuit traditional stories, animals and humans are not such different creatures, and animals often have much to teach humans about the world.
In The Orphan and the Polar Bear, a little orphan who has been abandoned on the sea ice by a group of cruel hunters is discovered and adopted by a polar bear elder. While living in the bear's village, the orphan learns many lessons about survival and his own place in the world.
Retold for contemporary audiences by Inuit storyteller Sakiasi Qaunaq and illustrated by internationally renowned artist Eva Widermann, The Orphan and the Polar Bear makes this beautiful traditional tale widely accessible for the first time.